Piloting into the future: Understanding how different factors affect the UK’s housing market

There has been a long-standing need to determine the impact various factors have on the fluctuations and stability of the UK’s housing market. The Bank of England have initiated a project, together with the Institute of New Economic Thinking (INET), University of Oxford, to develop computational models which will be instrumental in improving knowledge and understanding around the factors which affect these rises and dips within the market. Integrating these models with the DAFNI platform will negate the need for specialist knowledge to use them, enabling them to be accessed by a wider community in order not only to help bring stability to the economy, but also influence new developments nationwide.

Integrating these innovative housing models within the platform has been the most recent challenge tackled by the DAFNI Pilot Team. Currently developed by INET’s Dr Adrián Carro the first of the two housing models provides a useful tool for ascertaining how interest rates and other economic factors affect the UK’s housing market as a whole: in particular its stability. The second model, being developed in association with the EPSRC MISTRAL Project, is a more advanced spatial version and although the fundamentals are the same, it gives greater insights as follows:

In recent years we have experienced both booms and busts in the UK Economy which had a strong link with housing market fluctuations. It is therefore, essential to understand how changes to interest rates and other economic factors can affect the UK’s housing market and mitigate these as far as possible, as they can have a negative impact on the UK’s economy. Dr Carro’s models provide a framework to understand these fluctuations and their effects, as well as a sandbox where alternative policies can be simulated. This understanding will help to ensure long term resilience and confidence in the housing market thereby benefitting the public’s ability to buy and sell homes.

Through using these models a user is able to vary a number of factors (such as the probability of people investing in buy-to-lets) and see what effect these changes would have on house price fluctuations. The data on which these models depend has largely been extracted from sources such as Zoopla and Office for National Statistics (ONS).

Before bringing the models onto DAFNI it was apparent that access to the model and outputs were only possible if you were an expert user and understood the step by step processes needed to generate the outputs. This posed a problem, as the professionals who will form the main user community for these models are unlikely to have the necessary skillsets or indeed have a need to understand the mechanics. Bringing these models onto the DAFNI platform has greatly enhanced their usability as they can now be accessed by individuals with no prior specialist knowledge. In addition to this, remote users can access the models via a web-based interface, negating the need for software installation on the user’s machine.

Dr Carro highlighted the main benefits of using the DAFNI platform on which to run the models. He stated that DAFNI:

He went on to summarise that: “Access to DAFNI’s computational resources, coupled with the interface and visualisation tools described above, also allows me to efficiently explore the parameter space of the model and perform sensitivity analyses.”

How has this pilot benefited the further development of the DAFNI platform?

Dr Ronald Fowler of the DAFNI Pilot Team said: “Collaborating with INET’s Housing Project has greatly influenced the enhancement of the functionality of the DAFNI platform. The focus has been on the design of a system which can perform different types of model runs in parallel, thereby allowing for a more efficient analytics process. In addition to this, a process has now been outlined through which sensitivity analysis can be introduced for any model. This will have wide reaching applications for future models brought onto the DAFNI platform and will offer a greater level of functionality for its users.”

Screenshots from the user interface of the first housing model 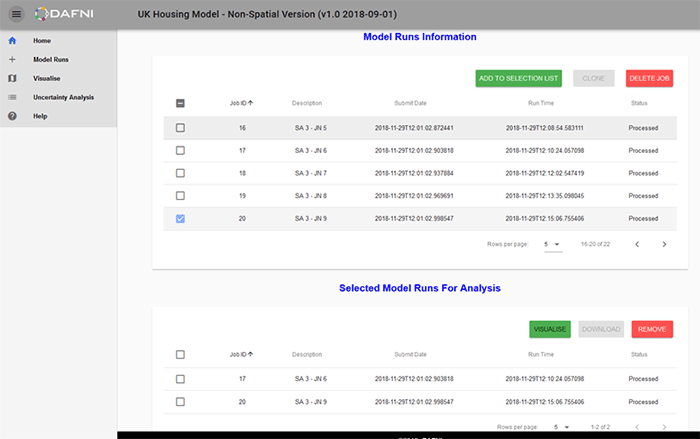 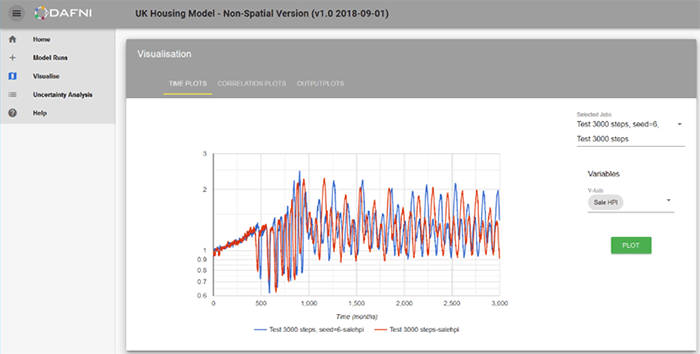 Illustration of the House Price Index over time

Whilst the development of these models is in its relative infancy, together with a partnership with DAFNI, the possibility for the utility and value they could bring in better informing forward planning is unequivocal. Predictions gained from the non-spatial tool will give greater insights in that changes to interest rates and different mortgage lending regulations can be tested in advance and so influence and facilitate decision making in policy institutions such as the Bank of England. Forecasts enabled by the spatial model could have vast implications on the planning of local infrastructure. Samuel Chorlton, DAFNI’s project lead for STFC said “We are looking forward to actualising the potential of these models on DAFNI and seeing the benefits they will bring to forward planning for the UK.”

Following on from the DAFNI Conference in June, there will be a greater opportunity for users to interact with models such as these, and gain a real sense of what they can achieve through DAFNI.

The link will open a PDF document 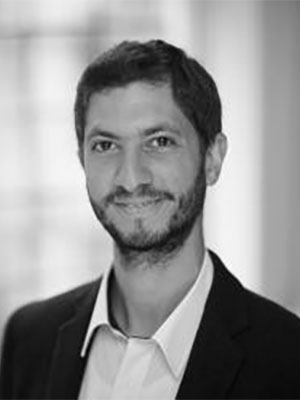